I have written in the past of my enduring admiration for Stephen King, since I first discovered ‘The Stand’ in the summer of 1975 his writing has only occasionally disappointed, and when he’s on form (IMHO) there’s nobody to touch him.

Last week I was chatting with a colleague who happens to be a published writer, and he mentioned King’s son, one Joseph Hillstrom King, who writes under the ‘nom de plume’ of Joe Hill. I confessed I’d never heard of Joe Hill (aside from an old American folk song that Joan Baez sang at Woodstock in 1969) but ten minutes online investigation revealed a young writer who has already won a number of prestigious awards.  And who happens to have a new book out.

I love serendipity, and that evening, while walking down Manchester’s ‘Deansgate’ I spotted that Waterstones (Britain’s last surviving chain of book stores) had hosted a book signing that very lunchtime. As I wrote recently about the near death experience suffered by HMV here, bookshops and writers seem to be responding to the challenges offered by online retailers. So seventeen pounds later I was the owner of a signed first edition by Joe Hill. 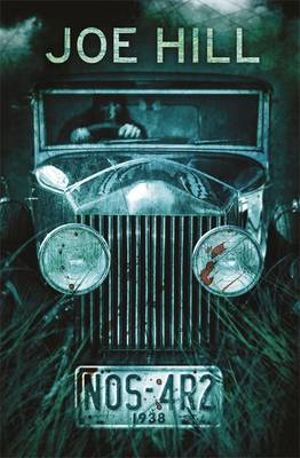 And it’s very good. His writing style and genre are very similar to his father – the apple didn’t fall too far from the tree on this one – and thus far I am about a third through NOS 4R2 (work it out) and am enjoying it greatly.

I suspect I will be seeking out more of Joe Hill’s work. Since the recent untimely passing of James Herbert, it’s always good to find new talent.