The Prince of Wales – Stow Maries

In recent months, since I’ve been back ‘darn sarf”, I’ve written ramblings about various local bars and restaurants, I usually publish these on TripAdvisor, I’m in there somewhere – 227,000 miles travelled, reviews in 26 cities.

One particular omission, which I’m about to rectify is The Prince of Wales at Stow Maries, a local institution, and an institution with good reason.

The Prince of Wales, Stow Maries

The landlord, Rob Walster – a Hull ex-pat – was one of the founders of nearby Crouch Vale Brewery back in the eighties. The Prince of Wales became a haven for real ale lovers as soon as it opened – Rob knows his beers – and it has consistently been recognised as such by local CAMRA branches. 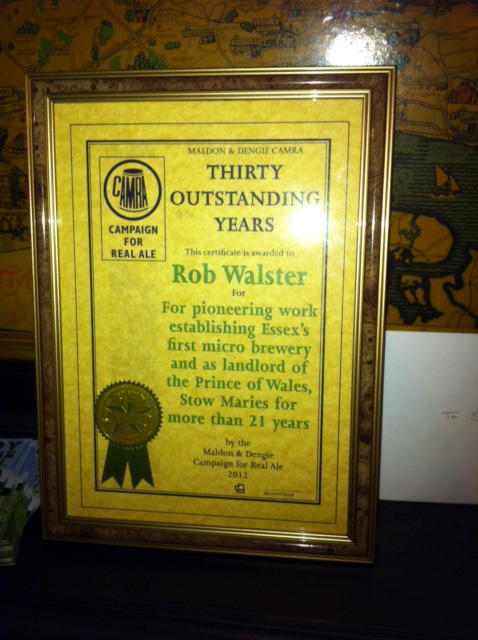 It’s a rambling place, comprising several cosy rooms with pleasantly mismatched ‘antique’ furniture. There’s outside space and barbecues in the summer, and open fires in the winter. Much of the décor reflects the nearby Stow Maries Aerodrome, Britain’s only remaining World War One airfield, at last receiving the funding and attention it richly deserves.

We’ve never availed ourselves of the accommodation but, having viewed the rooms, which look clean and well appointed,  there have been evenings when, after a few beers, the thought of for a few more beers and a bed for the night has been tempting.

There’s occasional entertainment, including the annual fireworks display, Burns Night, annual visits from the legend that is John Otway, and a pre-Edinburgh comedy bash each summer.

The selection of food is as dependable as that of the beers, focusing on fresh, local produce from the Dengie peninsula, and fresh fish. It’s easy to forget that Stow Marie’s is only a few miles from the coast.

When Rob was restoring the property they stumbled across a baker’s oven – the building clearly used to be a village bakery – and Rob frequently fires up the (wood-fired) oven in winter months to serve pizzas.

My wife and I regularly call in to ‘The Prince’ for lunch and, on a recent visit, we both enjoyed the fish. My wife ordered the grilled Sea Bass – Mediterranean style with Olive Oil, Lemon and Greek salad, while my Cod & Chips was enormous, fresh and tasty, accompanied by hand cut chips and (very) mushy peas.

All accompanied by a couple of pints of Crouch Vale Brewery’s excellent ‘Yakima Gold’ ale, brewed just a few miles away in South Woodham Ferrers.

One Response to The Prince