Our good friend – John Griffin, aka ‘Biffo’, a true renaissance man, check his website here – has recently been performing the one man play ‘Kipling’ – by Brian Clark.

Not for Biffo the life of a frustrated am-dram performer, he’s gone and gotten himself an equity card, contacted (and indeed met) the aforementioned Mr Clark to seek permission to stage his 1980’s play in this the 150th anniversary of Kipling’s birth.

Anyway, our witnessing one of Biffo’s performances necessitated a trip ‘south of the river’ to darkest Epsom. A quick reconnoitre on a well know search engine revealed the restaurant ‘Sicily’ to be mere yards from the Epsom Playhouse, so a plan quickly formed. A drive round to Epsom, dinner, theatre and then home.

The drive round the M25 was hard work, it was a filthy night, but we got to Sicily early for our 6pm booking. 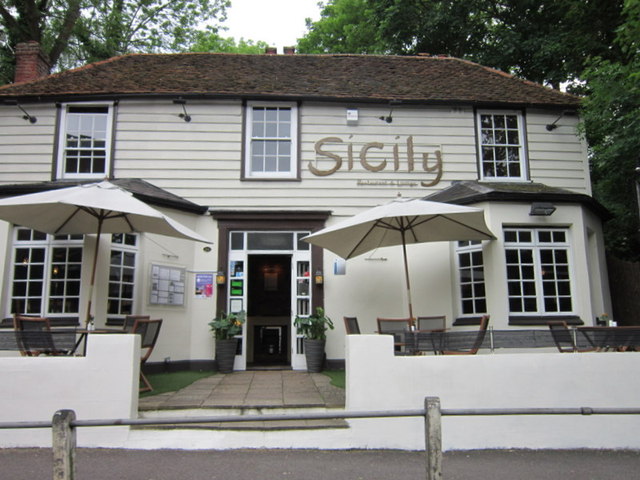 On arrival – there are a couple of steep steps up from the footpath level that, in all honesty, caused Val a little trouble. On arrival we were told by the hostess that our table was to be upstairs. She then saw Val’s walking stick and suggested “you should have told us when you booked“. I’d booked on the website and wasn’t aware that the restaurant has an ‘upstairs’.

That said, she offered us a table on the ground floor, on the understanding that she needed the table to be vacated by seven. Given that we were there for pre-theatre meal, that shouldn’t be a problem.

Conscious of the time, we skipped starters and went straight to mains, Jan opted for Pollo Piazzolo, Bill for Spaghetti Bolognese – which came in a strange textured glass serving dish – the rest of us going for pizzas. We all struggled to read the menu in the ‘romantic’ half-light, a couple of us having to resort to using the flashlights on our smart-phones.

A quick word about the waitresses who, other than the hostess, appeared to have been recruited from a local school or college, possibly that same day as they frankly didn’t have much understanding of the menu. That said the service was prompt and friendly.

The meals arrived in good time, and were all very tasty. I’d ordered the Pizza Catania (which is available calzone style for an extra quid); it wasn’t quite as spicy as I’d hoped. A request for chilli oil caused a little confusion for the waitresses, but a small flask of chilli oil was found which livened up the Catania pizza nicely. Val had the Pizza Trinacria (seafood) and was unable to finish it, but left with half the pizza in a box ‘for later’.

We finished our meals slightly after seven but weren’t hassled to vacate the table, and then headed off to the theatre – which is literally just over the road. The bill came to a shade under twenty quid a head, including a selection of drinks (a beer, some sparkling water, a Coke and a couple of glasses of wine). Not bad value, all things considered.

We might head back to the Epsom Playhouse again in the future. In which case we’d certainly consider returning to Sicily, but would ensure that we booked a ground floor table and, if it was dark, would probably bring a torch!