The Toby Carvery at Runwell is on a site sometimes known as the ‘Thomas Kemble’ – named after the gentleman who acquired the Lordship of the Manor of Runwell in 1824. It’s another of those places that I’ve driven past a thousand times but only visited a few times over the last thirty years.

These days, as the ‘Toby Carvery’ moniker suggests, it’s a carvery, but we don’t ‘do’ carveries, hence us not visiting.

Today however, we were in the vicinity it was on our route for the morning, and we were in need of a substantial breakfast, so we thought we’d give their ‘all you can eat for £4.49’ breakfast a try.

The Thomas Kemble is located on the A132 between Wickford and Rettendon, it’s a couple of hundred yards west of the junction with the A130, itself just a hundred or so yards east of the ‘Rettendon Turnpike’ intersection. It claims, on some websites, to be ‘ten minutes from the centres of Chelmsford and Basildon’ – I would suggest that that would be pushing it a bit, but it is very well located. 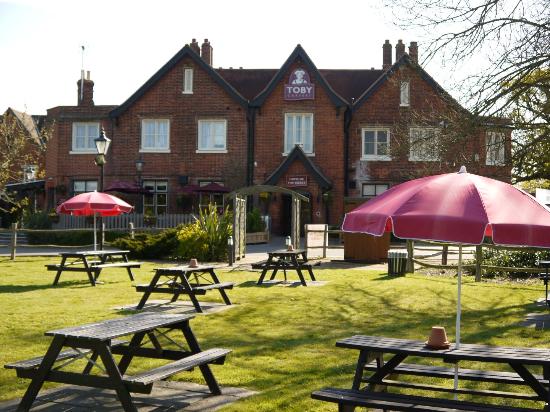 It’s a large, imposing, red brick building, set back from the (A132) road with pleasant enough gardens for drinks on a summer’s evening. There’s a Travelodge on site, there used to be a bunch of motel room cabins out back but they’re long gone.

We arrived just after ten on Saturday morning; you’re required to pay at the bar for your meals and drinks.

The barman/manager advised us that their delivery had been lacking in bacon, so there was no bacon available for breakfast.

Really? A full English breakfast without bacon? Could nobody have driven the three miles to the local Makro to stock up on bacon? Or would that have unduly compromised their profit margins?

The profits looked to be doing well when we arrived, as the restaurant was packed with no clear tables to be had. We shifted some stuff between tables to clear our own table. Twenty minutes later the tables still hadn’t been cleaned, although the young lady appeared to be keeping busy.

In the absence of bacon we skipped the ‘breakfast yorkshires’ (just wrong) and tried the sausages – partly undercooked in the middle, fried eggs – as overlooked as the sausages, tinned tomatoes, baked beans – nothing to get wrong with either of those, mushrooms, and finally the strange potato/onion/bacon/cheese melt dish that appeared to be recycling the previous evening’s roast potatoes.

The filter coffee was weak and pretty tasteless (one of our party described it as ‘love in a canoe’).

In theory, we were fully entitled to refill our plates and mugs, but we simply couldn’t face any more.

It was an experiment, but not one we’re likely to try again.

There are much better breakfast places nearby – such as The Eatery in South Woodham Ferrers – that provide much better food for slightly more money.

One Response to Toby