It’s been a couple of years now since I spent much time in Manchester, and things move on.

If a week is a long time in politics, a year is an eternity in Manchester, bars and restaurants come and go with startling speed, and pubs get refurbished and reinvented.

One such bar is the Waldorf on Manchester’s Gore Street, now owned by a subsidiary of Enterprise Inns who also operate the Crafty Pig nearby. 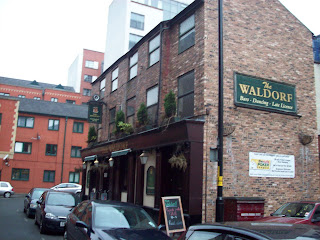 The Waldorf lies a couple of hundred yards away from Manchester’s Piccadilly station, behind the painfully chic ‘Malmaison’ hotel.

Inside it’s been tastefully refurbished.

There’s a good range of beers – any bar that stock’s Timothy Taylor’s ‘Landlord’ is alright by me.

Food-wise they also appear to major on hot-dogs with a variety of toppings, but I’d already eaten.

There are also large screen TVs showing football, but the sound was turned down, the piped music was eclectic if not eccentric. I think it was the Guardians of the Galaxy soundtrack.

As the Manchester Evening News said (here) in August 2016 “Nostalgia is fine, but pubs can’t rely on sentiment”.

I’ll be happy to return to The Waldorf when next I’m near Piccadilly.